(1)
I used found objects in my work, appropriating the city as my inner and outer landscape

When we first met, Nina was working regularly with collage and I had just set up my printmaking workshop. It seemed obvious to us that we could experiment with different collage techniques using the press. It didn't work. Nina was surprisingly undisciplined.

In Nina Fraser's work, collage is not montage, instead it stabilizes on an image that seems to be already there. Hence my mistake. The collage is prior to itself and constructs a necessary and unknown space and place. The movement is one of recollection, cutting, reconstruction, and occupation. But the important word here is movement. One image is followed by another. Stable or not so stable. The clear mastery of the composition is reassuring. But if we look again, we look better.

a shelter from storms

In Staircase (2015), as in Untitled interior (2019 / 2020), order is disorder. Orientation, scale, perspective, depth and the normal perception of space are being played with. There are paintings on the walls, but there are no walls... they float like stairs, like paper cutouts, like bodies rising and falling. And despite the suspension, everything works in a kind of bourgeois everyday, as in Zero point //01 (2021).

In Zero point //01, it is not the relation of scale between the figures that is broken, but the relation between the smallest constituent elements of the digital image, the pixels.. are they pixels or just squares of color? Enlarged in relation to the background image they interpose themselves like walls or objects.

It is not a matter of reading the images despite the subversion and play, because that doesn’t affect it. Until Interior II (2021), the quiet intimacy of interiors remains undisturbed. If we try to climb the stairs in Staircase and fall down, we would be surprised. Like Alice, it takes us a while to realize the strangeness of the place, something offbeat. Just enough to turn the world upside down without impeding its recognition and function. Collage, in Nina Fraser's work, asks for naming, points backwards and outwards, does not escape language but plays with it, makes a pact of fiction. It is metonymic and metaphorical and ironic.

to the cracks (of the image)

The collages look perfect, well-behaved, but we must look again. There are small traces, a brutality in the cutting, or in the montage, or in the residual marks. The work happens by attempts, by encounters. The process does not seek perfection, the finish, or cleanliness. Hence my mistake. The hard or torn borders of the cutout, the glue, the crumpled paper, the stain. The cracks in the broken paper where the gloss of the varnish has cracked, the white that appears under the printing ink. Little warnings to keep an eye out for.

A house is cut out and placed over the emptiness of a sheet of paper. The collage understands the support as space, geometry, a system of axial and three-dimensional orientation. But there is no house, or landscape, or place, without time. In House arrangement, the series of houses seem to create the idea of a refuge. Idyll and exile.
​
My grandfather was a Flemish artist. We didn’t see him so often, but every year he would send us a handmade collage 'card' for Birthdays.. etc

The images are constructed like old postcards or family photos - they create space and time, they summon up a past. Again the scale. The girl sitting on the car in the foreground is smaller than the sequence of mailboxes in the background. Behind, the suspended house appears jagged against the sky and horizon. Everything is reassuring. Sometimes the nostalgic effect gives way to the comic as in House arrangement III, whilst humour touches the dreamlike as in House arrangement IV .The presence of bodies summons us. Where do these figures turn to? Glass silhouettes, too transparent to be shadows. Their body is the body of the windows, their time is that of the present. The figures look at us or are looked at, they provoke voyeurism. They fall, they wait, they lurk, they escape. They are drifting, caught in stills. Pieces of films, posters, walls, doors, streets, windows. The construction of a city from their fragments and the fragments of their bodies, sometimes made of the emptiness of clothes, (Red, 2020), or of clippings where there might still be a presence of someone (Sidewalk // edition II).
In Peel back (2018), a body cuts itself out, detaches itself from the image, withdraws, but is not alone, for with it there are other bodies. It is not his gesture that tears it. It was already torn. They are images that could not be imagined outside of their role. They are also ghosts.

on the road for the world to see
on top of a hill, in the rain,
fragments of five microcosms,
Like a sort of paper maché 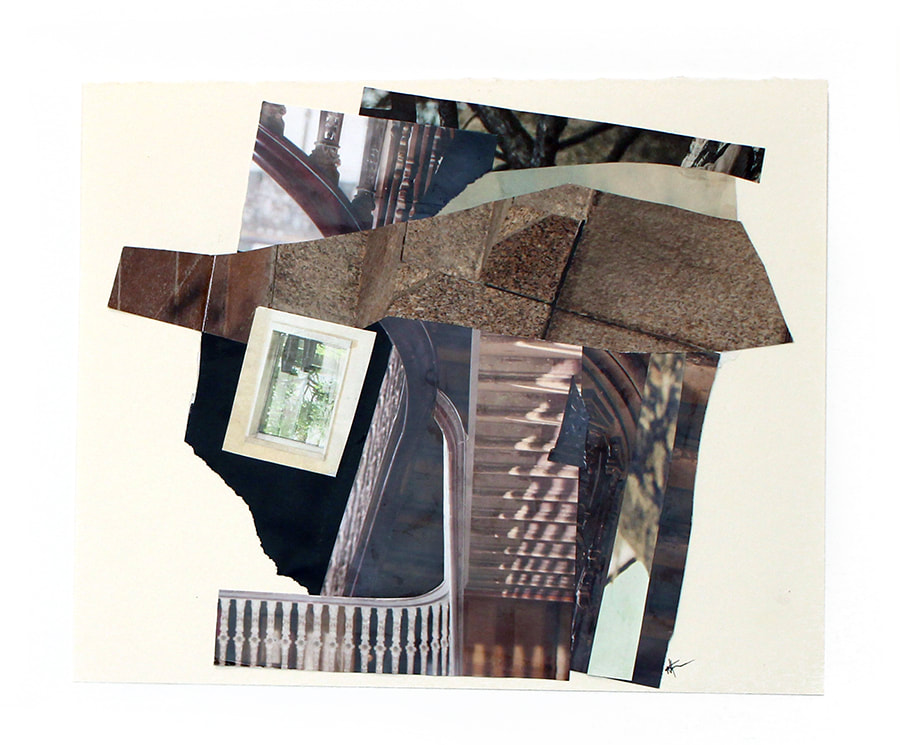 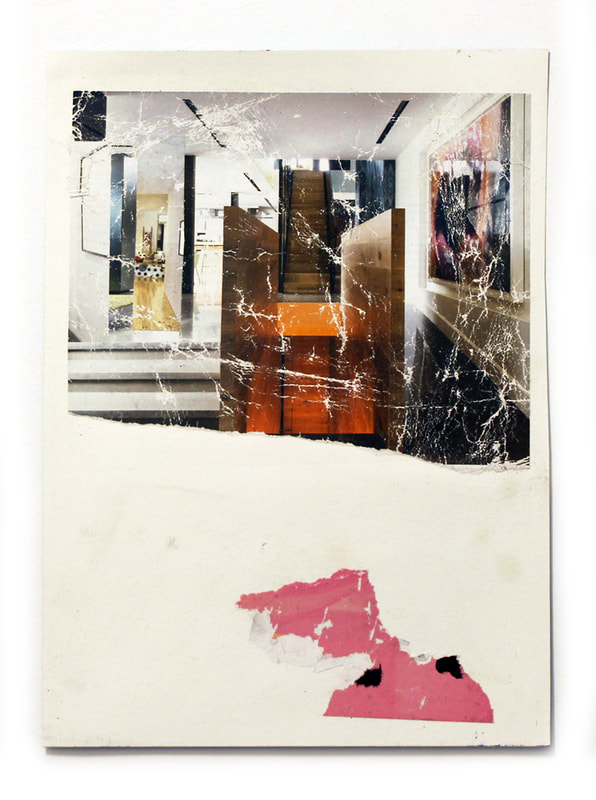 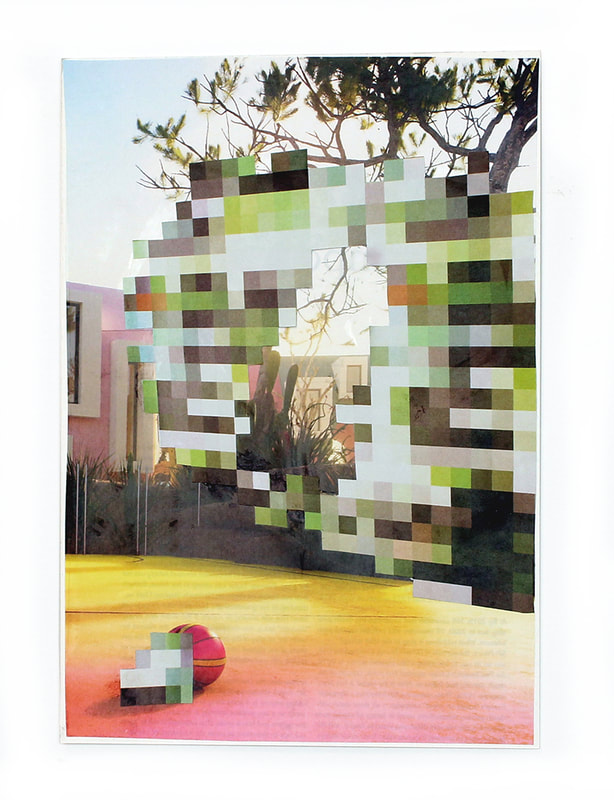 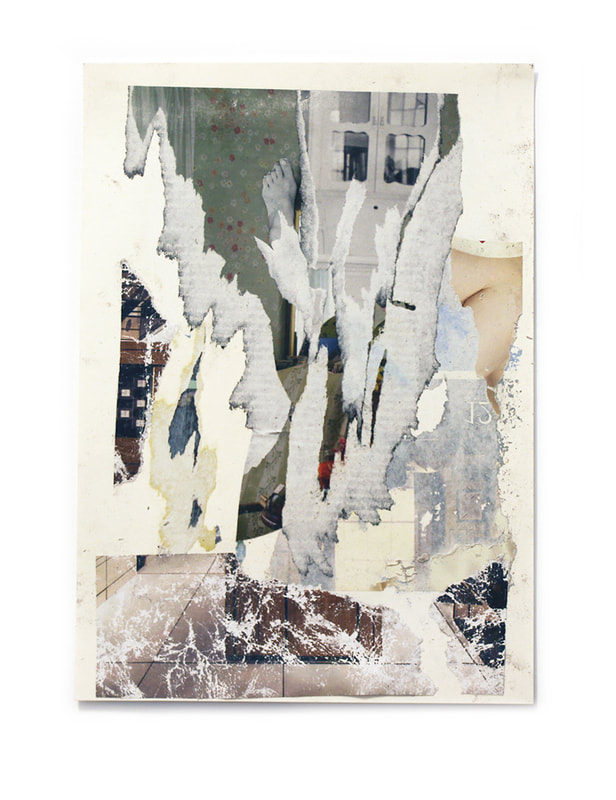 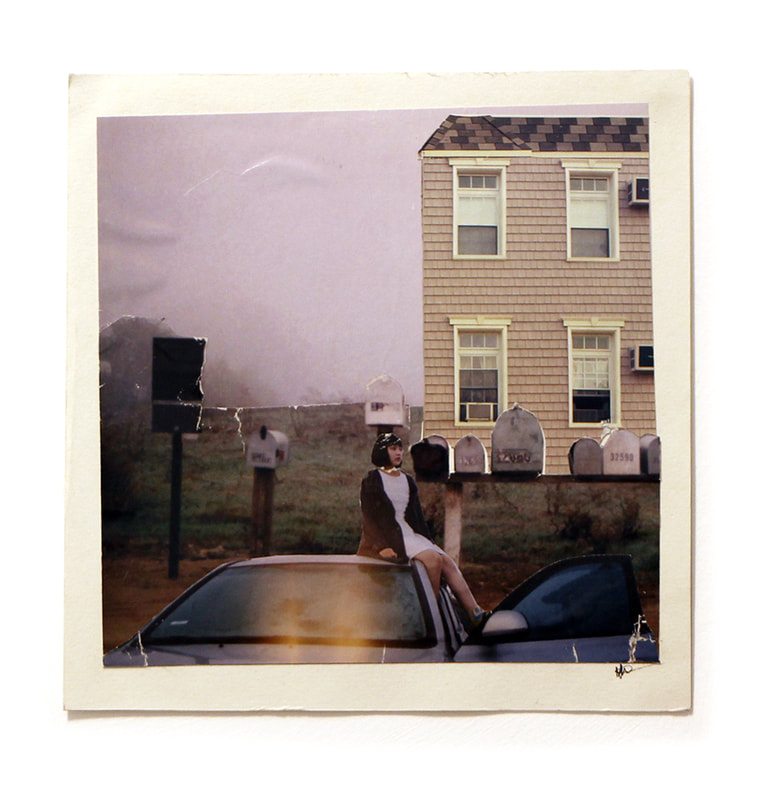 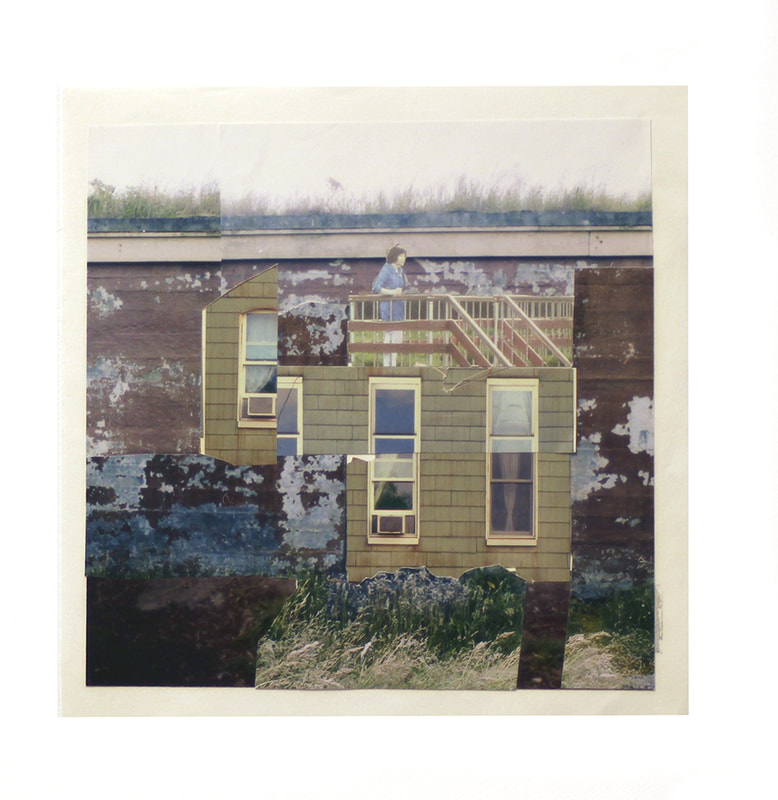 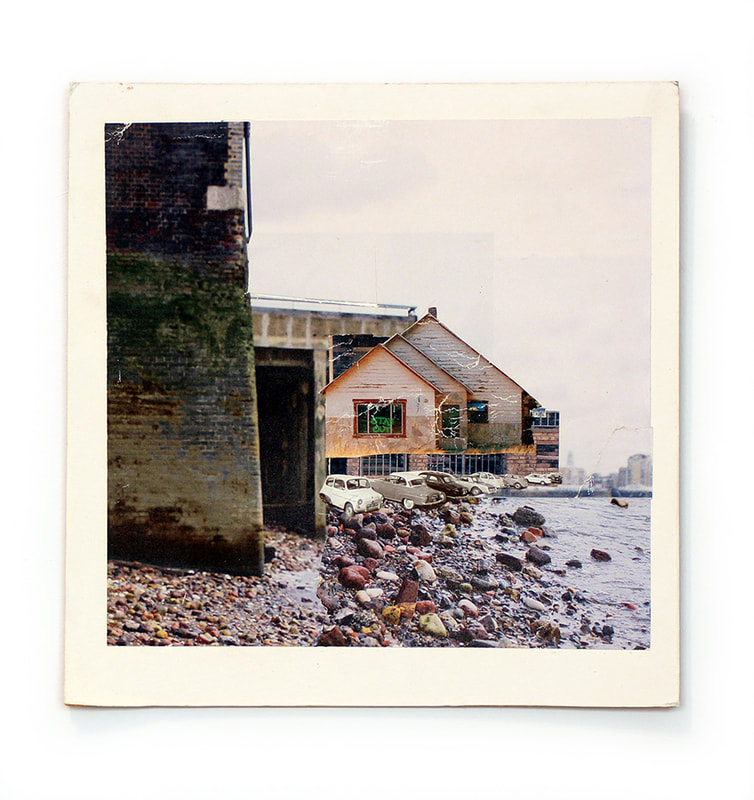 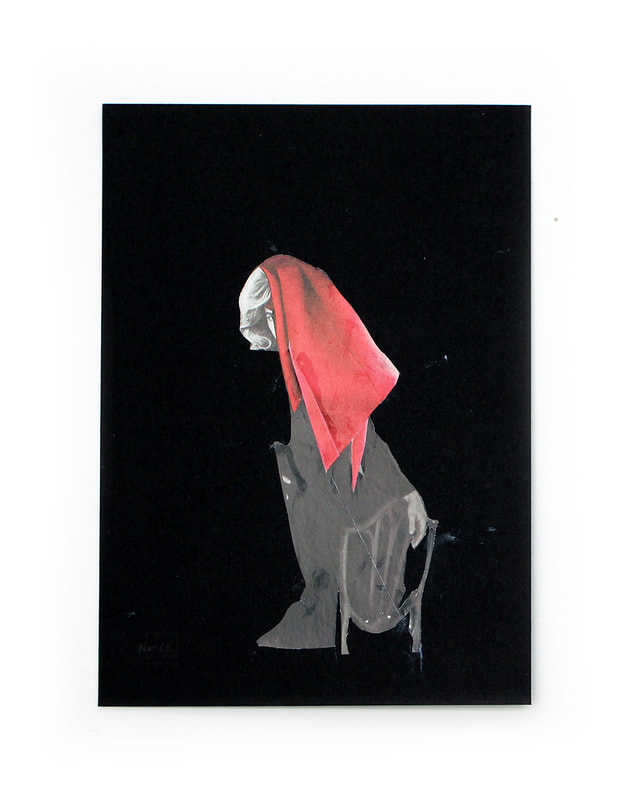 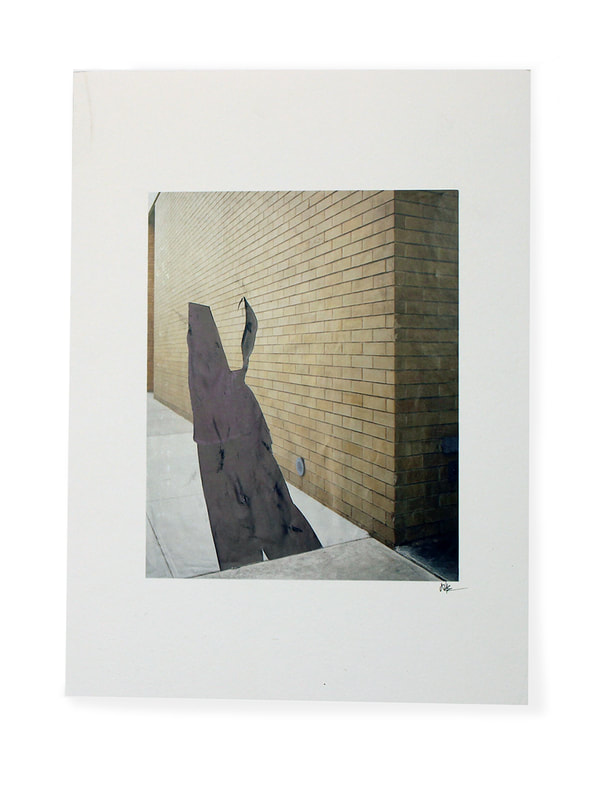 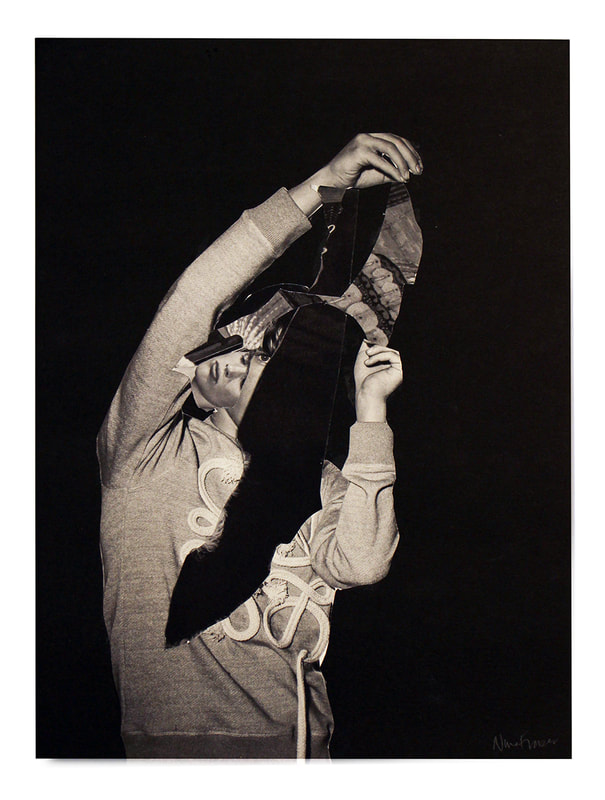